OpenTally is open source software currently under development for the counting of elections using STV and related systems. Part of its feature set is the implementation of constraints on elections: for example, where a certain minimum or maximum number of candidates must be elected from a particular group.

The situation with more than one constraint is more complicated. The general approach is set out by Hill in [2], but is computationally difficult when there are a large number of candidates and constraints. In [3], Otten presents an alternative method which yields the same results but scales more efficiently. Otten presents the method for the case of 2 independent constraints, and remarks that ‘the same logic can be applied with higher dimensions if required’. The extension of the method to higher dimensions, however, is not necessarily completely clear from the 2D case alone.

To see how Otten's method can be extended to more than 2 independent constraints, let us first consider the 1-dimensional case, i.e. with a single constraint. Suppose the candidates are divided into 3 disjoint categories (1, 2 and 3), and a certain minimum and maximum must be elected from each. Otten's grid would look as follows:

The blue cells indicate where the minimums/maximums would initially be set from the constraints. The asterisk (wildcard) indicates a total across a particular constraint – in this case, as there is only 1 constraint, there is a single grand total cell.

Consider now the addition of a second constraint with 2 disjoint categories (A and B). The grid must be extended by taking the single row and duplicating it vertically, such that there is additionally a row for A and a row for B:

Consider now the addition of a third constraint with 2 disjoint categories (X and Y). The grid must be extended by taking the single plane and duplicating it in the third dimension, such that there is additionally a plane for X and a plane for Y: 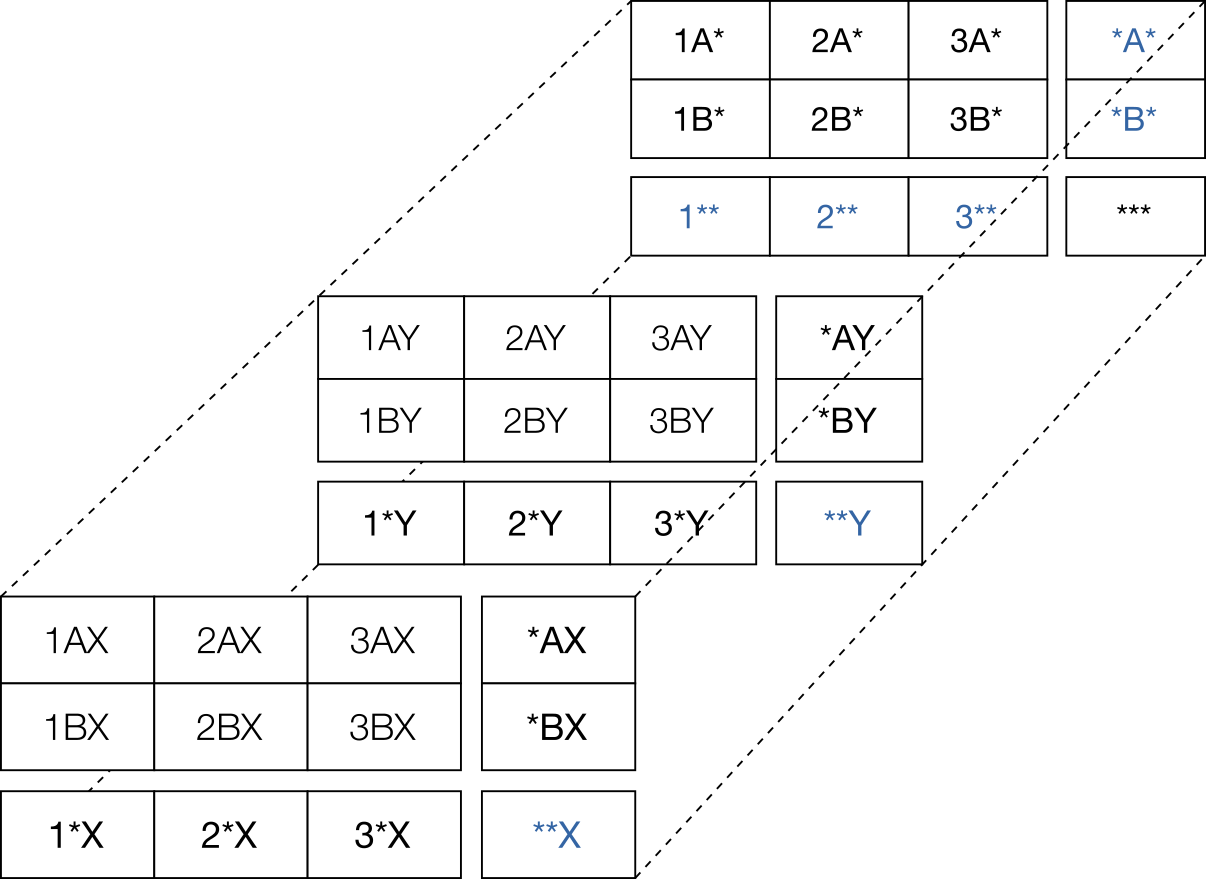 Again, the blue cells indicate where the minimums/maximums would initially be set. The other totals/subtotals cells are shown in bold type.

We can see now how to extend Otten's methodology to higher dimensions. Consider rule 4 of Otten's method: ‘The row/column minimum must be at least the sum of the minima of the items in the row/column’. We can extend this in the ≥3D case beyond only rows/columns to include all totals/subtotals cells.

This forms the basis for the handling of multiple constraints in OpenTally.