In an earlier post about another reverse engineering project, I used IDA Free as a disassembler. Since then, the US National Security Agency has released its reverse engineering tool, Ghidra, as open source software, which I will use for this project.

In comparison to IDA, Ghidra requires some coaxing to correctly disassemble the software binary. For example, see the following Ghidra disassembly: 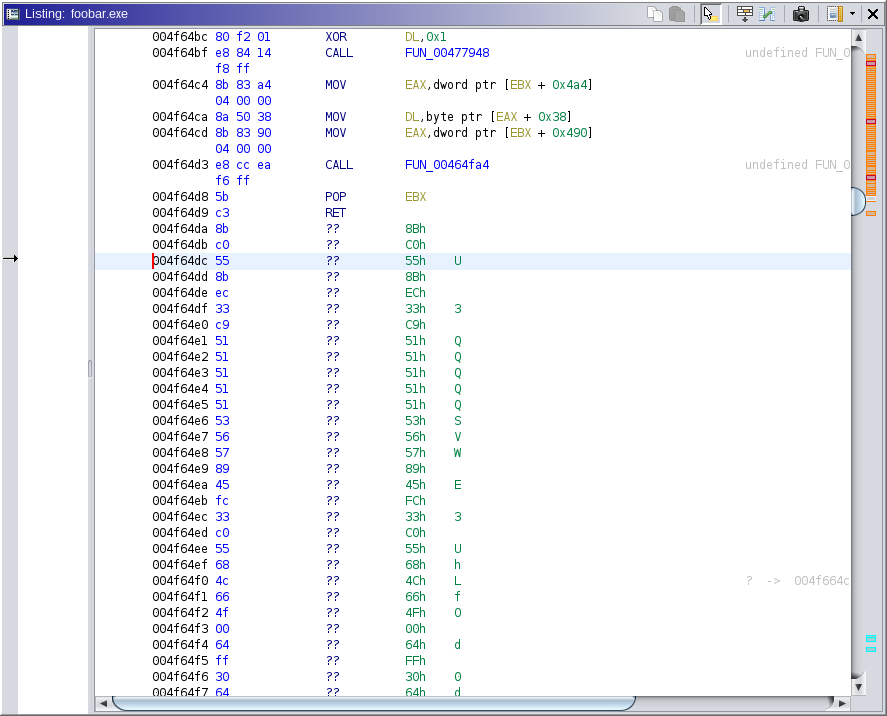 IDA automatically identifies a function at 0x4f64dc, but this is not identified by Ghidra. As it turns out, this is one function which will be relevant to our analysis. Ghidra can perform a more extensive analysis via Analysis → One Shot → Aggressive Instruction Finder, but the result is still incomplete.

We know from the metadata of the software binary that this build was produced in Delphi 7 (released 2002). Both Ghidra and IDA have trouble with Delphi binaries, resulting in missing symbol names and missing labels relating to Delphi classes. To overcome this, we leverage IDR, the Interactive Delphi Reconstructor, which extracts the relevant symbols from the binary: 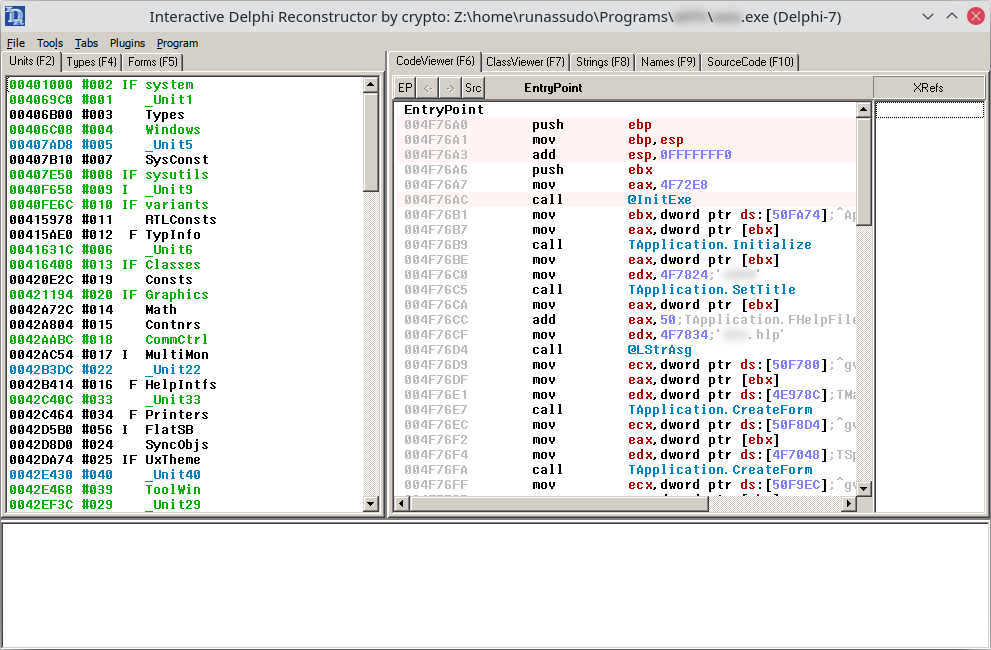 We can then import this data into Ghidra using Dhrake, which identifies the function at 0x4f64dc as TMainForm.Register1Click, and also identifies other functions such as InputBox and @LStrLen, which will greatly help with analysing the disassembly:

We note that TMainForm.Register1Click contains references to "Enter Registration Code" and related strings which appear in the dialog when the user accesses the registration feature of the software.1 It appears, then, that this is a relevant target for our analysis, so we examine in greater detail Ghidra's decompiled output, which is a feature not available in IDA Free. The relevant code reads:

In this project, I am running the software on Linux using Wine, which comes with its own debugger, winedbg, which has GDB integration. Since mid-2021, Ghidra has debugger support, but it does not play well with winedbg or Wine under GDB, so we will use winedbg/GDB manually.

Using winedbg/GDB, we therefore set a breakpoint at 0x4f65f2 before allowing the software to run:

We then enter the registration form, input an arbitrary registration code, and wait for the breakpoint to be triggered. When this happens, we confirm that the default value of DAT_007e8d44 is, as we suspected, 0:

We then manually change the value at address 0x7e8d44 to equal 1, and resume execution:

We are greeted by a pleasing message which probably no one has seen in over a decade:

Although we have unlocked the functionality of the software, it would be nice if we were able to do this without needing to use memory manipulation each time. Returning to the TMainForm.Register1Click decompilation, we expand our scope slightly:

There is then a call, effectively, to @LStrCat3(&local_10,local_18,local_14);. Again, this is an undocumented internal Delphi function, but Google leads us to a random Chinese forum post which lets us know that this performs local_10 := local_18 + local_14. The overall effect, then, is to swap the first and last 5 characters of the registration code.

Then the swapped registration code is passed to StrToInt64, which, as expected given the name, parses a string into a 64-bit integer. But this software binary, from 2004, is a 32-bit application, so how is a 64-bit integer represented here? The Delphi documentation tells us that it is stored as edx:eax.

We can confirm this using the debugger. Using winedbg/GDB, we set a breakpoint just after the StrToInt64 call, and inspect the values of eax and edx after inputting 1234567890 as the registration code:

Returning to TMainForm.Register1Click, we note that this result is stored in DAT_007e8d64 (low 32 bits) and DAT_007e8d68 (high 32 bits). However, the decompilation of the next part of the function is incorrect, so we turn to the raw disassembly, which relevantly reads:

It looks like we call @_llmod, passing as one parameter the parsed registration code, and passing as the second parameter (on the stack) the Int64 0xa1b2c3.2 Presumably, this performs the modulo (remainder after division) operation.

We then check to see if edx = 0 and if eax = 1, and if both are true, we move the value 1 into DAT_007e8d44 (which, as previously discovered, indicates the registration code is valid).

Presumably, then, edx:eax is the Int64 result of the modulo operation, and the code is considered valid if the value of the registration code (the 2 halves having been swapped) modulo 0xa1b2c3 equals 1. A trivial registration code which satisfies this requirement is 0000100000.3

We input this code into the software, and confirm that the code is accepted.