Recently, I sought to port some software written in NU-Prolog (written by one of its creators, Lee Naish). Due to NU-Prolog's unique features, not found in contemporary free Prolog implementations such as GNU Prolog or SWI-Prolog, this pointed to porting NU-Prolog to modern systems as the easiest approach.

The source code for NU-Prolog is available at https://people.eng.unimelb.edu.au/lee/src/nuprolog/, and it makes use of standard GNU/POSIX build tools – make, gcc, sed, awk, etc. However, it is written for BSD-like systems, and will not compile on Linux, even when appropriate configuration flags are set, producing errors such as:

Finding a supported target to build on; or, a tour of the greats

Before proceeding any further, I wanted to be able to build NU-Prolog on a supported system, to verify its operation and ensure that the software I was interested in would work. By default, the provided source code for NU-Prolog builds for MACHINE_SGI, i.e. a Silicon Graphics (SGI) machine, presumably running IRIX, its proprietary Unix operating system.

The MAME emulator is able to emulate IRIX 6.5.22 running on an SGI Indy, and a helpful tutorial is at https://sgi.neocities.org/. I was able to get IRIX to start booting on MAME, but it was very slow, and after 10 minutes waiting for IRIX to boot, I gave up and moved on.

The other machine targets listed in the NU-Prolog source are:

Having set aside SGI IRIX, my attention was next drawn to MACHINE_VAX. VAX machines were highly influential, and the VAX has been described as ‘the single most influential computer of all time’. I recall my own first exposure to the term many years ago on a computer jargon glossary page for ‘grok’ hosted on some GeoCities equivalent.

SimH can emulate a VAX-11/780 or MicroVAX II, and can run 4.3BSD, the (almost) last version of the original Berkeley Unix, and which has been described as ‘greatest software ever written’. The greatest software on the most influential computer – what a combination!

Following instructions from the Gunkies Computer History wiki, I was able to install 4.3BSD on SimH, but faced difficulties with the setup being quite temperamental – networking is fiddly, so installing GCC and transferring the NU-Prolog code would be nontrivial, not to mention that BSD would sometimes refuse to boot.1 Faced with these obstacles, I again turned elsewhere.

The next option to catch my eye was MACHINE_MACII, the Apple Macintosh II. I have previously emulated a Macintosh II running Mac OS using Mini vMac (here's an old post of mine about Mini vMac from 2016).

However, Mini vMac does not emulate the hardware required for A/UX. Instead, Shoebill is a now-discontinued Macintosh II emulator with A/UX support. I was able to boot A/UX under Shoebill, but as with SGI IRIX the performance was poor.

The natural answer to poor emulation performance is to stop trying to emulate a different instruction set architecture, and use something x86-based, which would enable use of hardware-assisted virtualisation. One machine target listed by NU-Prolog is MACHINE_386, so I turned my attention to setting up AT&T System V Unix. I was able to install SysV in qemu-kvm, but found little in the way of resources on getting gcc and the other build tools installed. Instead, I turned to FreeBSD.

FreeBSD 4.11 comes bundled with gcc and all the other tools required to build NU-Prolog, and also supports networking, SSH and FTP out of the box, avoiding the issues faced with the other systems. 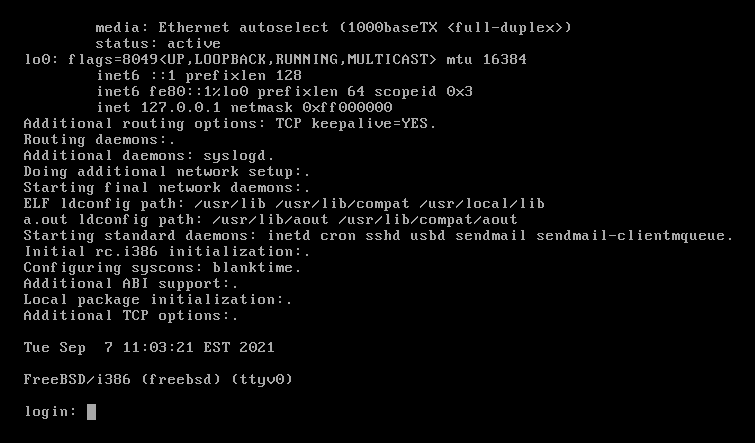 Unfortunately, NU-Prolog does not build correctly on FreeBSD out of the box either, even when MACHINE_386 is set:

Luckily, though, this error is easily addressed:

The next error to squash comes from awk, reporting:

This syntax error appears to be because tolower is a predefined function in this version of awk, so it cannot be used as an array name. This is a simple fix, too – we run:

This also appears to be some sort of reserved word conflict, so we fix that too: (the function is not actually called anywhere)

The next tool to be built is nc (the NU-Prolog compiler), which is written in NU-Prolog assembly and built using na and nep. Unfortunately, this results in a segmentation fault:

Helpfully, FreeBSD 4.11 also bundles the GDB debugger, so we can pass -g to GCC in the Makefile to build debugging symbols, and investigate this segfault in GDB:

We note from the code that we are dereferencing the pointer atom, which points to address 0x7f778, which is not a valid memory address. What's going on?

The relevant code in nep.c is:

And one more step:

So the pointer to Sym_BMT is first being bitwise AND-ed with 0x3ffffff. On 32-bit x86-based Unix-like systems, binaries are loaded into memory starting at address 0x08048000. We can see this using objdump:

The bit twiddling, then, will clearly corrupt the pointer!2 This must not have been an applicable convention on NU-Prolog's original supported systems.

Thankfully, a workaround for this issue, though slightly obscure, is not too difficult. We need to create a custom linker script that will load the binary at some lower memory address (say, 0x01000000) where pointers will not be mangled.

We recompile NU-Prolog, yet find that, while compiling nc, nep segfaults again. GDB, however, shows that the segfault is at a different location:

After some investigation, I noted that nep was reading the bytes 00 00 00 12 from memory into a dword, yielding the unreasonable looking 0x12000000 (as x86 is little-endian). These bytes, however, would be the representation of the very reasonable value 0x00000012 in big-endian! Further investigation reveals that machdep.h contains some code to automatically detect the endianness of the host system; however, this does not account for MACHINE_386:

After manually adding -DLITTLEENDIAN to the compile flags, nc now compiles correctly! And, nc correctly compiles the software written in NU-Prolog that I was interested in.

Now that we know what is required to build NU-Prolog on BSD, porting to Linux is mostly straightforward. We must additionally pass -m32 in several places to force a 32-bit binary to built, some #includes need to be added, references to sys_errlist and sys_nerr need to be replaced (as they have been deprecated and removed in glibc), etc. as the compiler instructs.

However, there is one area where some more work is required: NU-Prolog ships is own malloc implementation. You may think we could simply strip this and replace it with glibc malloc, but NU-Prolog also interfaces with the internals of its malloc implementation to dump memory in bulk to a file and later restore – this is how compiling and executing compiled code works in NU-Prolog.

The best approach would probably be to refactor NU-Prolog to remove this dependence on malloc internals, but this would be a lot of work. Instead, I prefaced all nep's bundled malloc functions with nep_, allowing it to coexist with glibc malloc.

However, this causes glibc's own malloc to segfault (for example, when printf is called), presumably because both malloc implementations are stepping on each other's toes by trying to directly manage the nep data segment using brk. brk is used to grow/shrink the process's ‘data segment’, representing a contiguous area of virtual memory from which malloc makes allocations.

The nep_malloc internals NU-Prolog depends on for dumping and restoring memory require this segment to be contiguous, so I could not simply pass nep_malloc through to glibc malloc. To address this, I modified nep_malloc to instead initially request a 128 MiB allocation from glibc malloc, and then subsequently make its own allocations from this buffer:3

However, this ran into the issue from earlier, where NU-Prolog discards the high bits of pointers. malloc cannot be forced to make allocations at low memory addresses only, so I instead turned to mmap to reserve 128 MiB of memory at address 0x02000000, which fits within the range of NU-Prolog's supported pointers:4

And with that, and a helluva lot of warning: implicit declaration of functions (FIXME!) we have enough of NU-Prolog compiled on Linux to run the software I was looking into!

(It turns out that this software has a significant logic error that makes it unsuitable for use…5 Que sera!)