Using perf and Hotspot, we obtain the following flamegraph:

4.7% of total execution time is spent in Election::realise_equal_rankings, which is responsible for processing ballots with multiple candidates preferenced at the same level. This is surprising, because such a ballot is not permitted under the Australian Senate rules, and so there are no such ballots in this election. The original code iterates over every ballot unconditionally summing the weights, and rebuilds the Vec representing each ballot's preferences one item at a time – an expensive no-op.

The new code (ee7ac06 and 6bb127a) determines at parse time (when this information is readily available) whether the ballot contains equal rankings, so the realise_equal_rankings step can be skipped when no ballots have equal rankings.

This has substantial performance implications, lowering the average execution time to 7.12 (± 0.02) seconds.

We also see that a substantial amount of time (nearly 30%) is actually spent reading the election from file, and a large portion of that (17% of total execution time) is spent in BLTParser::usize reading integers from the file. This is not itself surprising – the election data file consists almost entirely of integers to be read – but what is surprising is that most of the time in this function is spent in string allocation. The relevant code reads:

An alternative implementation operates directly on usize integers, which do not require heap allocation:

Despite the additional complexity of checking for overflow on reading each digit, this implementation is much faster on the whole, coming in at an average 5.99 (± 0.03) seconds.

The definition of Candidate is as follows:

The default derived implementation for Hash is to hash each member of the struct. However, this is quite inefficient, given that HashMaps on Candidates are a major data type in OpenTally, and given that we already have a unique integer index for candidates.

We can add the index to the Candidate struct so it can be easily looked up, and use nohash-hasher to simply use this index as the hash (422a198). Similarly, we can use the index to simplify equality checking on Candidates, which is also used by HashMap (974a56d). Doing so brings the average execution time down to 5.63 (± 0.02) seconds.

Why HashMaps at all?

If we have sequential, small, integer indexes for candidates already, this raises the question of why we are using HashMaps at all. One imagines it would generally be faster to simply use a Vec and perform lookups directly by index. This obviates the need to hash the key, find a bucket for the hash, and check for equality of keys.

The HashMap data type is widely embedded within the OpenTally codebase, so a direct change would be a large undertaking (and very premature without benchmarks!), so candmap.rs implements a mock data structure which mimics the API of a HashMap, but internally uses a Vec. In broad strokes:

The graph below compares the average execution time after each successive optimisation. Error bars are shown at 5× true scale. 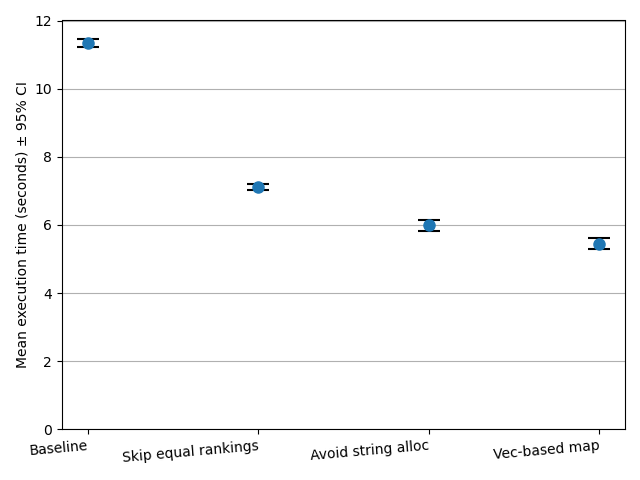