We begin with the following simple common major chords: C, E, F and A. Along each string of the ukulele, we mark the first note up the length of the string that is within the given chord. This gives us the familiar typical fingerings for these chords:

This completes the set of major chords.

We now move to the major seventh chords, which, compared to the major chords, only involve moving one note a semitone down (e.g. C-E-G-C to C-E-G-B).

Consider the chords C, E, G, A and B♭. Note that the root note in each chord is doubled. To convert each to a major seventh chord, we simply move one of those root notes down a semitone:

We can now do as we did for the major chords, and move each chord shape up the fretboard to fill in the remainder of the chords:

There are no further adjustments to make, so we are finished with the major seventh chords.

We now move the seventh note down another semitone to reach the seventh (dominant seventh) chords (e.g. C-E-G-B to C-E-G-B♭).

Consider the chords Cmaj7, Emaj7, Gmaj7 and Amaj7. To convert each to a dominant seventh chord, we move the seventh note down a further semitone:

And the dominant seventh chords are complete.

Now, bringing the third scale degree of each chord down a semitone gives us the minor seventh chords (e.g. C-E-G-B♭ to C-E♭-G-B♭). At this point, we also respell some enharmonic chords to avoid double-flats and double-sharps.

Consider now the chords D♭7 (C♯7), E7, G7 and A7. To convert each to a minor seventh chord, we move the third scale degree down a semitone:

Again we fill in the remaining chords, nothing that the pattern for Am7 will continue past Bm7 through to Cm7:

We are at the home stretch. Finally, by dropping the seventh note of the minor seventh chords and replacing with another note of the chord, we arrive at the minor chord (e.g. C-E♭-G-B♭ to C-E♭-G).

Consider the chords C♯m7, Dm7, Fm7, Gm7 and Am7. To convert each to a minor chord, we replace the seventh note with another note of the chord:

And finally, as with the major chords, we can Cm, Em and F♯m using open strings:

This completes the minor chords.

Now that we have completed the entire set of chords in this series, try looking across the rows and down the columns to identify the patterns just described: 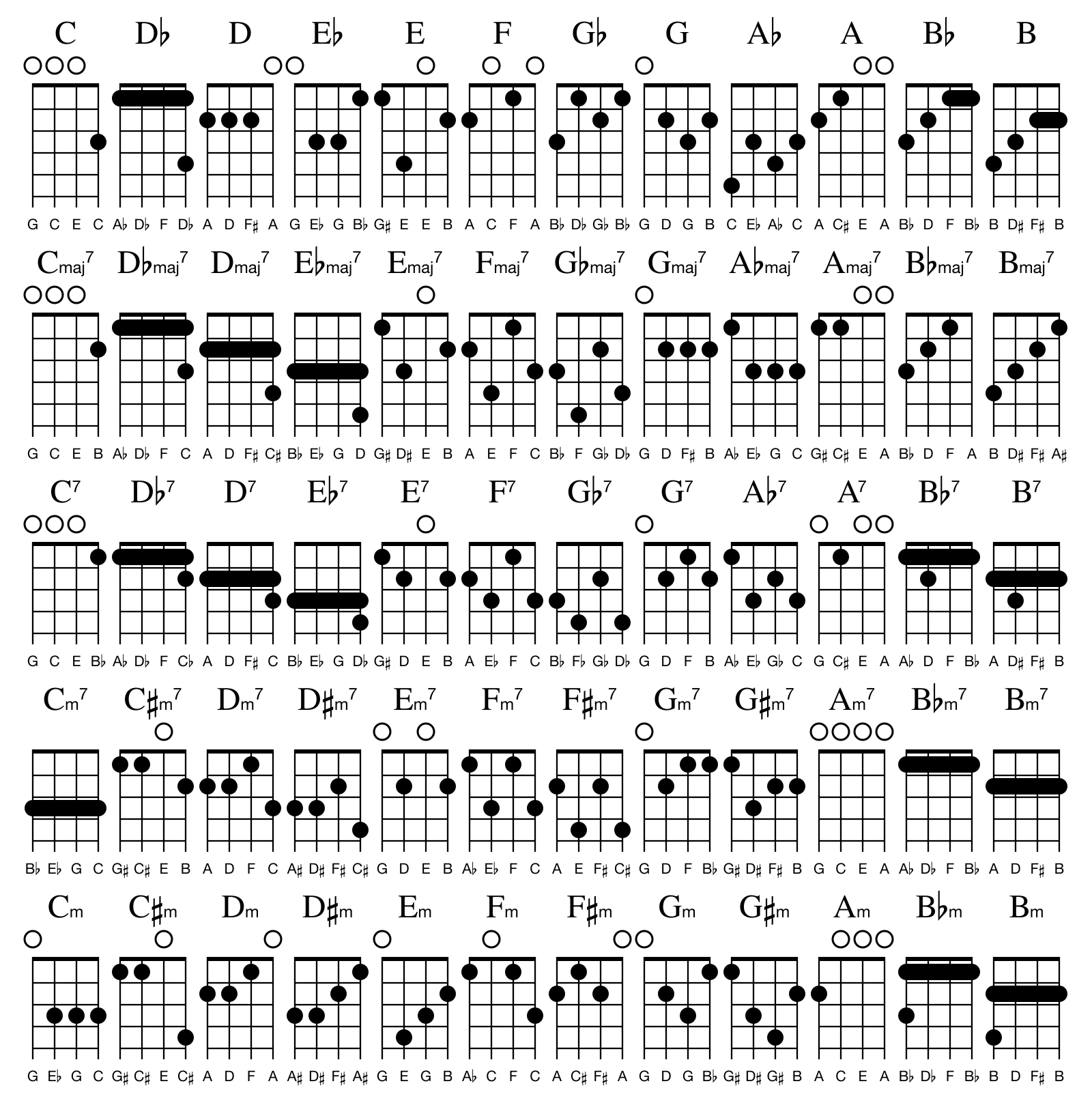